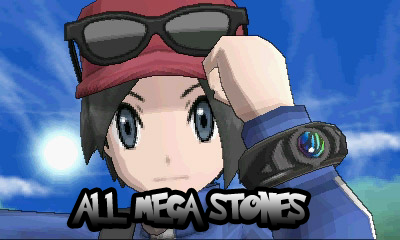 All Mega Stones + PBS File by Tricko1 from deviantart.com CC-BY

Mega Evolution allows certain pokemon to change their appearance and get boosted stats. Only 42 Pokemon can Mega Evolve and for some of the games, the Mega Evolved form of a few Pokemon might be different depending on which game you get from that generation. Later on in Pokemon X and Y, the player is given a Key Stone. This Key Stone is then turned into a pracelet that the player carries. In order for a Pokemon to Mega Evolve, the Pokemon needs to hold the Mega Stone that is specific to them. For instance, a Blastoise can be Mega Evolved when it is holding a Blastisinite during battle and the player selects the "Mega Evolve" button. The player is only allowed to have one Pokemon Mega Evolved per battle, so if the player has multiple Pokemon that can Mega Evolve, then they need to choose wisely.